Ewa Mataya Laurance is a Swedish-American proficient pool player, born on 26 February 1964 in Gavle, Sweden. She has been playing pool since she was age 14. Her professional carrier started in 1980 when she won the Swedish National 9-Ball Championship. Soon, Ewa Laurance dominated the billiard game and won the National title again in 1981.  The same year she claimed another two victories, winning the Swedish, and European 14.1 Championships. 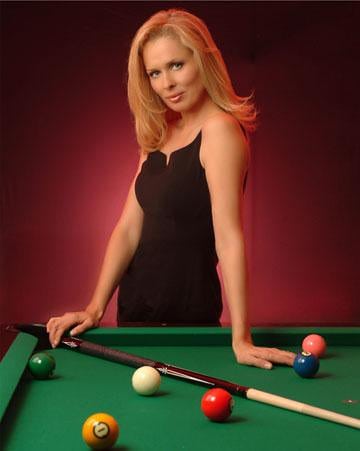 In 1982, at age 17, she married 31 years old Jimmy Mataya, (an American professional pool player) and was the most powerful pool couple of that time. In 1994, after their divorce, she married Mitch Laurance, an actor and also a pool commentator for ESPN.

Ewa Laurance has a versatile personality. She also appeared in many TV programs, including Game Show Network (also known as GSN) game show Ballbreakers. She is regularly performing commentary on ESPN as an expert analyst with her husband, Mitchell Laurance. She also appeared in TV commercials.

As a writer, she also has written books for junior players that include, The Ewa Mataya Pool Guide, The Complete Idiot’s Guide to Pool & Billiards, and Quick Start Guide to Pocket Billiards. These guides offer clear, easy-to-understand instructions starting from picking and holding of the cue stick and playing tricky shots.
Description and Net worth

In 2005, Ewa Laurance won the second annual Women’s Trick Shot Challenge beating Allison Fisher, in the last match, winning $25,000. In 2012, she won the WPBA Masters 2012 title taking $10,000 as a cash reward. She also has received the Billiard & Bowling Institute of America (BBIA) Industry Service award. According to our sources, Ewa Laurance has a net worth of $2 million.

Ewa Mataya Laurance is one of the greatest and prominent personalities of the pool’s history. She has been a top-rated player on the WPBA tour for two decades. Ewa Laurance is amongst the most eminent billiard personalities and was famously known as The Striking Viking. Due to her extraordinary talent and devotion to the billiards, the New York Times Magazine featured her on the cover photo of the magazine. She also remained a three-time WPBA president. She received the honor of the Billiard Congress of America’s Hall of Fame inductees, in 2004.